The games we play as children are rehearsals for the roles we play in life. Traditional toys for girls nurture homemaker stereotypes, simulating traditional domestic roles through play. In these photographs, I am exploring the possibility of the same staging taking place with the prolific, but publicly hidden occupation of prostitution. By constructing these scenes in miniature, I project representations of the sex industry onto the medium of the conventional dollhouse. As polar opposites, the homemaker and the sex worker are highly constructed and restrictive roles, the most deeply-rooted myths of the feminine. Pieced together from many sources of representation these constructed spaces can be peered-into and examined.

"For her 2006 series, Play, she reconstructs a brothel, a strip club and other sex trade sites in dollhouse scale, then photographs and enlarges those scenes. Eisen’s settings range from the lurid, like a sparkly-bedspreaded, mirror-walled room, to the bare bones, like a dingy sunken-mattress, wrung-out-washrag affair. In all cases, Eisen fascinates with sheer meticulousness. Bowls of condoms, rows of fetish footwear, piles of porn mags and side tables of toys, lube and egg timers are all convincingly miniaturized . . . Overall, the photos give a sense of these places as schizophrenic sites for both far-out fantasy and cold commerce, for potential ecstasy and possible exploitation."

- All Eyes on Eisen by Leah Sandals, NOW Magazine

"Emerging local talent Leanne Eisen also makes reference to seedy interiors, but she has chosen legalized Las Vegas sex hotels as the influence for the interiors that take centre stage in her dollhouse photographs. Eisen has skillfully constructed her scaled down props and interiors by hand, the indeterminacy in not knowing if these are photographs of actual spaces in a brothel give the armchair voyeur the opportunity to ponder at length what may have taken place in these vacated spaces, and perhaps find it unsettling when it becomes apparent they are contemplating a miniaturized version of a brothel in which they could become pimp, client, madame or sex worker, wielding full control over their domain. There is the mere suggestion of what may have transpired in the bondage room, the bedrooms, the bar with its dancer's pole, the Victorian chamber with its lush red velvet sofa, the rooms are empty of sweating bodies but the trace of their past and future activities are inscribed in the environments made by Eisen, awaiting the next visitor." 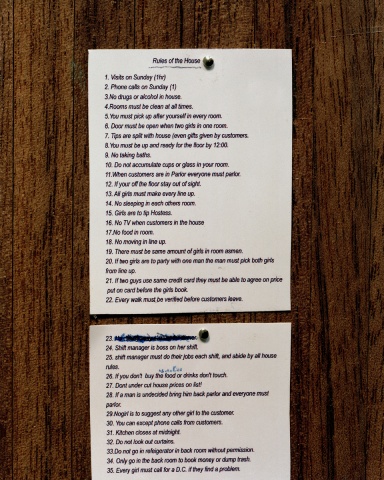 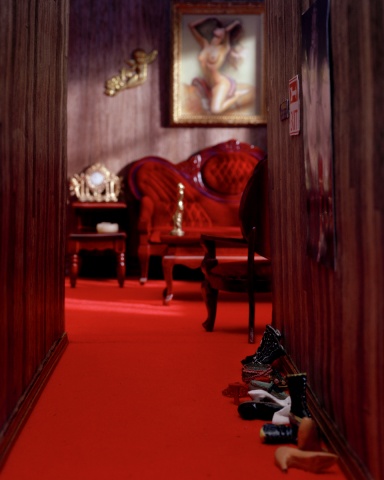 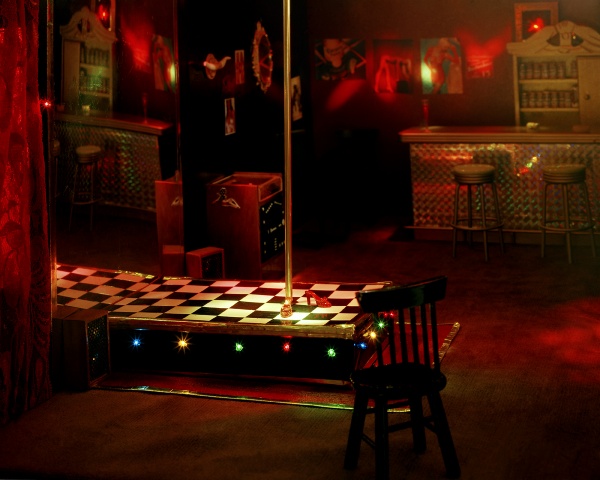 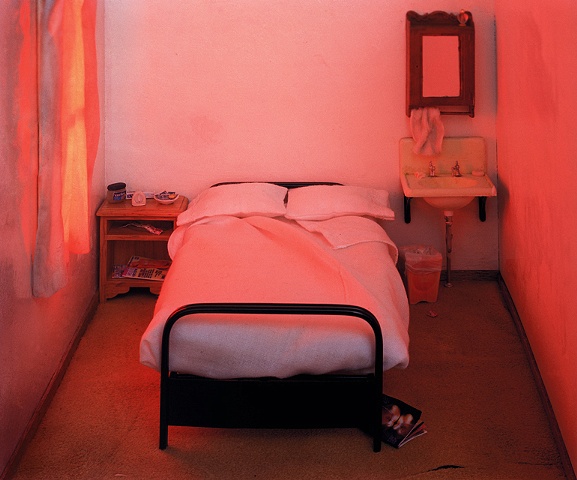 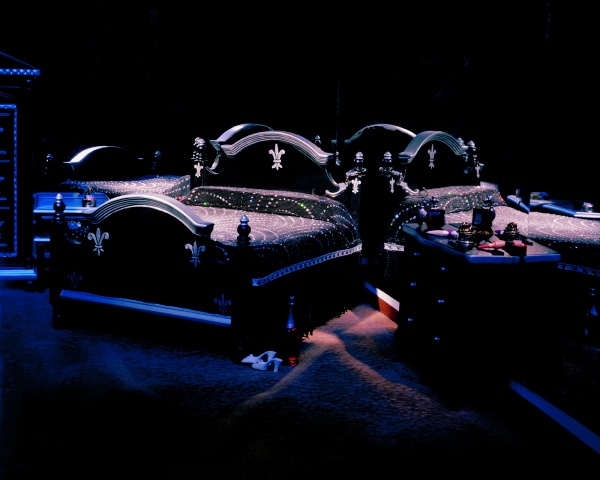 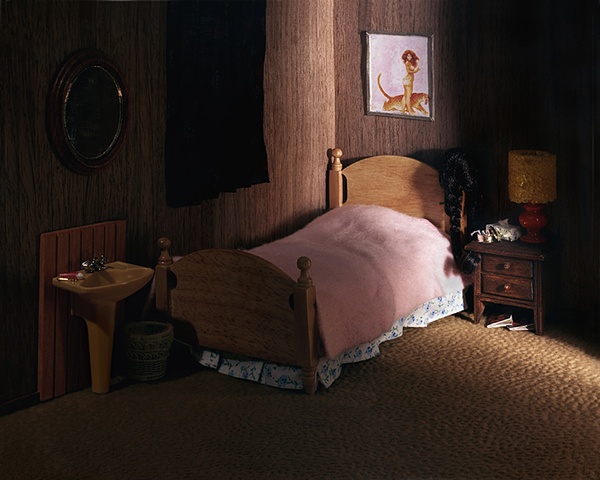 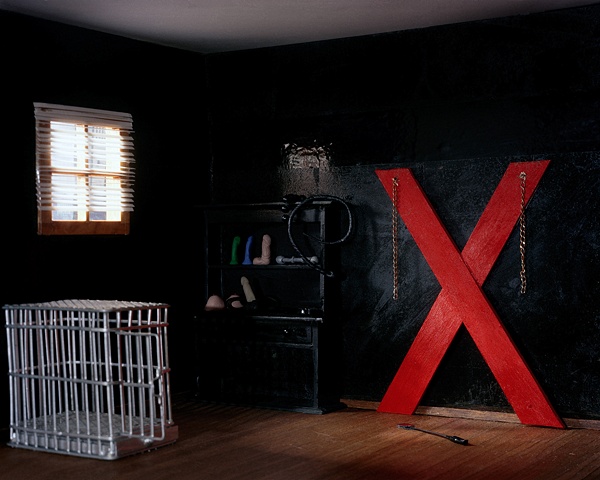 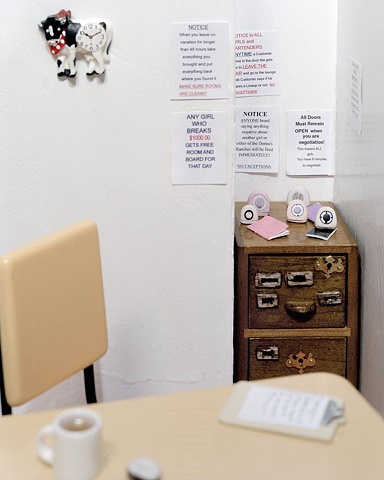 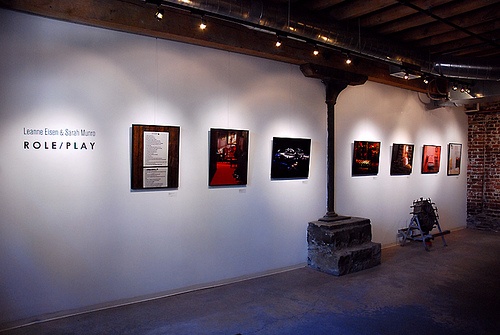 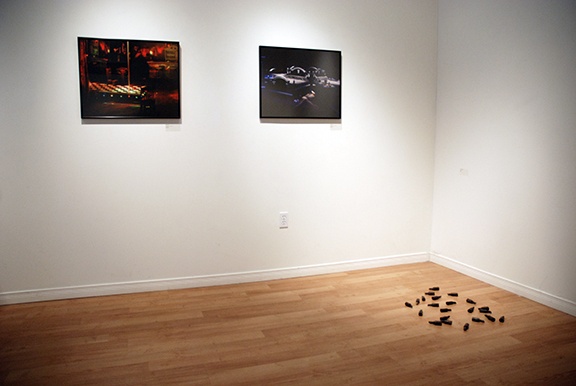